“How beautiful maleness is, if it finds its right expression.”

I am over at Oleander Plume’s place today sharing some of my favourite male nudes. When I started that guest post I went down a rabbit hole of reading about the history of the male nude in art and photography. What I read was interesting, but not altogether surprising – analysis of the male nude continues to be largely focused on historical warrior imagery or the overt sexualisation of the body, most obviously seen in the work of photographers like Robert Mapplethorpe and Herb Ritts.

Exhibit A snuck in ahead of me on this issue yesterday and posted his own excellent reflections on male nudity, but I was pleased to read it as interestingly he touched on the same of the issues of aggression in male nudity that art critics frequently raise, saying some men “use their nudity as a way of imposing and asserting their power over women.” I don’t disagree that this is an issue to be mindful of, but I do think using this as a starting point can limit our ability to articulate, interpret and enjoy the beauty of the male body, sexualised or not.

There can be huge disparity in responses to very similar photography simply because of the gender of the subject. When Mapplethorpe toured his work in the late 1980s and early 1990s, charges of obscenity were brought against a museum, yet Man Ray (who was not without his own critics, of course) had not faced such charges sixty years earlier: why are we allowed to appreciate Man Ray’s women in bondage as art but not Mapplethorpe’s men? Similarly, when Leopold Museum in Vienna curated a retrospective called Nude Men

from 1800 to the present day in 2012 public outcry forced them to apply ‘modesty’ stickers to publicity posters. At the time the museum director expressed disappointment that this should happen in the 21st century when they had held numerous exhibitions of the female nude with no complaints.

Some would argue that this is born out of art’s reflection of society’s casual acceptance of the objectification of women. I don’t disagree that this is part of the problem, but I am not taking this piece down that avenue and it’s stating the obvious to say that not all nudity is objectification. I think the more pertinent point here is that by continuing to attach labels of aggression, fear or distaste to the naked male body society censors opportunities to enjoy, appreciate and celebrate it. I enjoy looking at female nudes – sometimes I admire the camera work or composition, sometimes I get ideas for my own work, sometimes I become less (and if I am honest, sometimes more) intimidated by my own naked body, and sometimes I just think ‘wow, that’s hot’! Frankly, in the name of equality I want the same opportunity to seek inspiration from, artfully critique and perve at as many male nudes as I can women. And let’s be honest here, with current state of play there are far fewer good nudes of men than there are of women.

More than one person has asked me why there are no men on Exposing 40. I have photographed men and these can be seen elsewhere, but so far none under this banner. There are plans afoot to photograph a male friend for this project in a few weeks’ time, and as a result of Exposing 40 others have spoken to me about their changing relationship with their bodies as they age. Hopefully some of those conversations will move out of the pub and onto the screen, but so far the women in my life are definitely owning this project. I am pleased this blog is giving them a platform to discuss their bodies and insecurities, but I don’t want men to be left out. I have said it before but body positivity is not just a women’s issue. In fact it’s one of the things that’s easier to talk about as a woman and I would like to see that change.

Ongoing debate about how men responsibly present and consider the power of their nude body is important, and we can’t escape how male nakedness was historically used as an overt expression of power, but I hope the narrative evolves. I hope we are soon occupying an artistic space where men can more freely celebrate their beauty and use imagery to explore their own relationships with their body without self or social censorship.

It was only a matter of time before I delivered up a homage to Man Ray for a certain friend in NYC, wasn’t it?

I have a mirrored bedside table, which made capturing the reflected lips pretty easy, but I have had quite a play around in post production. The first two are my interpretation of the sepia-toned original and a colour version of it. The second two use reflection but have a different composition.

Which do you prefer? 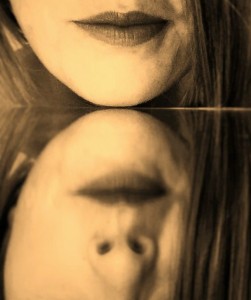