This weekend’s prompt was published just a few days before Exhibit A and I had our first evening at mine since his daughter was born. Our first evening at mine since late November, in fact. I was excited and also bizarrely nervous – I had butterflies in my belly as I was waiting for my doorbell to go! I hadn’t missed him as such; in the intervening three months we’d had our wonderful photo adventure with Livvy, a close-to-his-with-phone-at-hand steak dinner in the in-between period between due date and arrival date, wine tasting for my birthday and drinks before my East Africa trip. And of course there’s been opportunities to meet Martha and see Livvy too. In short, from where I’m sat, he – they! – have done a spectacular job of balancing and tending all parts of their life and I have so much admiration for their little unit of three (or five counting the cats!).

So although I hadn’t really missed him, I was excited because, of course, despite the happy memories created in the intervening three months, I was more than ready to hang out naked with a glass of wine in hand. I was probably nervous because I wondered would it be the same? Would the casual intimacy that’s been fine-tuned over the years still be there or had I suggested an evening at mine too soon and would he rather be at home with his two best girls? I needn’t have worried – with the same pre-dinner snacks I always buy laid out on the table (but with Prosecco upgraded to Champagne to toast Martha) muscle memory kicked in and it was the same as ever. Before I knew it we were opening our usual bottle for the road and the Manics were on Spotify.

So, back to the photo. The prompt had come out a few days earlier and during my flight home from Kenya I’d been pondering ideas for a double exposure incorporating both of us. I love a circular story and I liked the idea of picking up where this post had left things. In the event, I completely forgot to even mention my ideas, never mind try and articulate them. At one point he called from the bedroom, “perhaps you’d like to photograph this” and I did try, but I was also cooking dinner and, well, if you’ve got to decide between photographing a hot man wanking or saving the dinner, you save the dinner. Well you do in our world! A few days later though I thought, “bollocks, I forgot about the prompt week photos!” I still liked the idea of doing something with the two of us so I rummaged around in my archives to find a photo first used almost two years ago and then shot my own version to blend it. I quite like the effect of it! 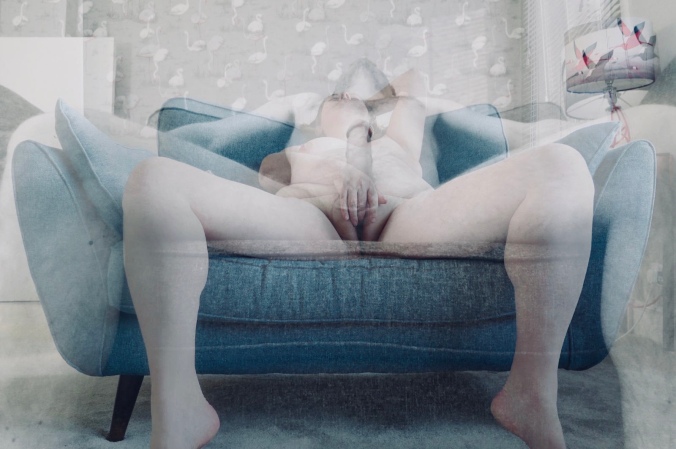